Dependents and Dependency: Immigrants and the Future of the American Economy

By Jean Boucher and James Witte

In its July 1 blog, the White House stressed an important, yet often overlooked, aspect of immigration reform. As part of the immigration reform discussion we ought to recognize that the U.S. increasingly depends on immigrants to help replace our population and, more importantly, our workforce, which funds our pay-as-you-go Social Security system. The U.S. is a few years into a demographic transition marked by a shift in societal dependencies, most obviously apparent as the first wave of baby boomers enters retirement. But retiring baby boomers are only one side of the dependency equation. On the other side is the historically low U.S. fertility rate currently registering at 1.9 births per woman, which is below the population replacement rate of 2.1 births per woman. Importantly, this is the national total fertility rate, which would be even lower without the higher rates of fertility found among many immigrant groups the total U.S.

Dependency and dependency ratios are standard fare for demographers as they define populations. People are born, they live, may or may not migrate, and then die. There are two main stages of dependency: childhood and old-age. In these stages individuals are dependent on those in the workforce. Dependency ratios can be calculated based on children, the elderly, or as a combined total. This is typically done by taking the count of the specific population in question and dividing it by the number of those of working age (18-64).

So how does immigration figure into dependency ratios? Figure 1 below provides a population pyramid based on data from the U.S. Census Bureau’s 2010 Current Population Survey, which is the official source of unemployment data for the U.S. Population pyramids offer a snapshot of society, describing the composition of a population by age and gender. To use this tool to highlight the dependency theme in America’s current immigration story, we have added immigrant generations (1st, 2nd and 3rd or more) to the typical age-sex pyramid (See Figure 1). Along the horizontal-axis is the population count in thousands, while age is on the vertical axis. Within each bar of the pyramid green and orange is the native-born population, those born in the US. Green is the third generation and higher; orange is the second generation, i.e., children of immigrants. Yellow depicts first generation immigrants (the foreign-born), who (as the pyramid shows) are mostly of working age. Early baby boomers, note the “population bulge” beginning among those in their early-60s and continuing through those in their mid-40s, have just begun to retire. 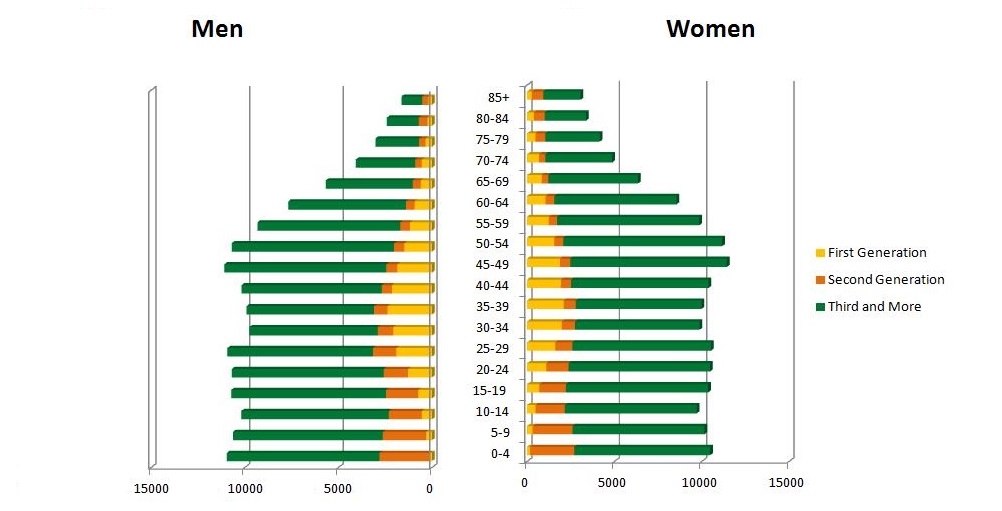 There are two important facts to be noted about the foreign-born, firstly, they are rarely children (under 18-years-old) or elderly (over 64-years-old): they are of working age. At 21 percent, the total dependency ratio for the foreign-born is extremely low; they are typically not dependent but are working. Secondly, as they are mainly brought here as adults, their “burden” as children, dependent on those of working age, was carried by another country, and another set of workers. We, like other countries, would not want our children to leave after the expense of educating them.

In sum, and in general, if the pressing immigration debate is concerned about whether immigrants are a burden or not, then the debate is misguided. Early baby boomers have just begun to retire. As this process continues an increasing number of them will become dependent on the economic contributions of the foreign-born and their children. The foreign-born amongst us are less of a burden than we are to ourselves. They are generally of working age, were educated at someone else’s expense, and when compared to the native-born population, a greater proportion of them are in the workforce. To ignore this issue as part of the immigration reform discussion amounts to a short-sighted focus that ignores the contributions immigrants and their children will make to America’s economic future.